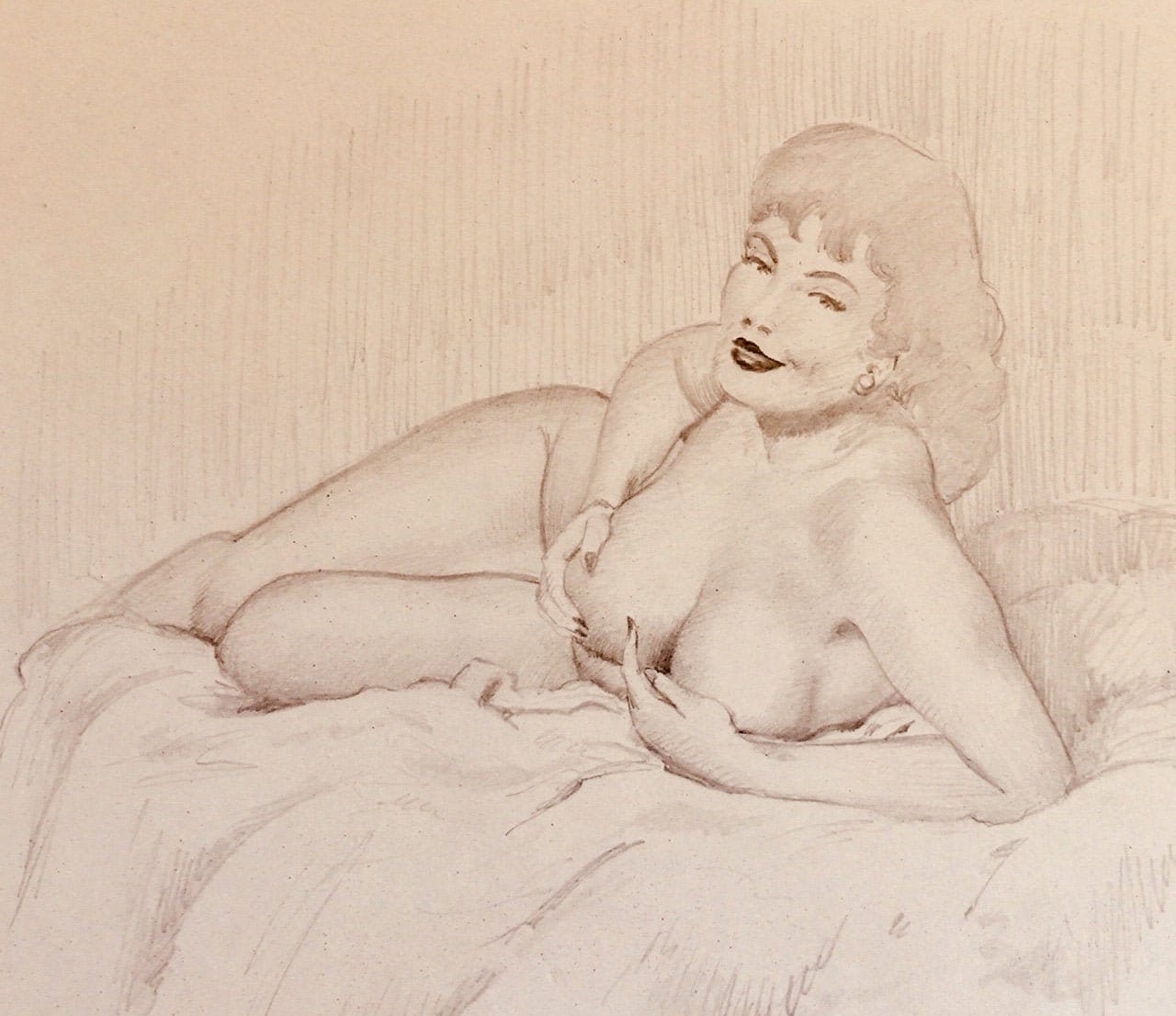 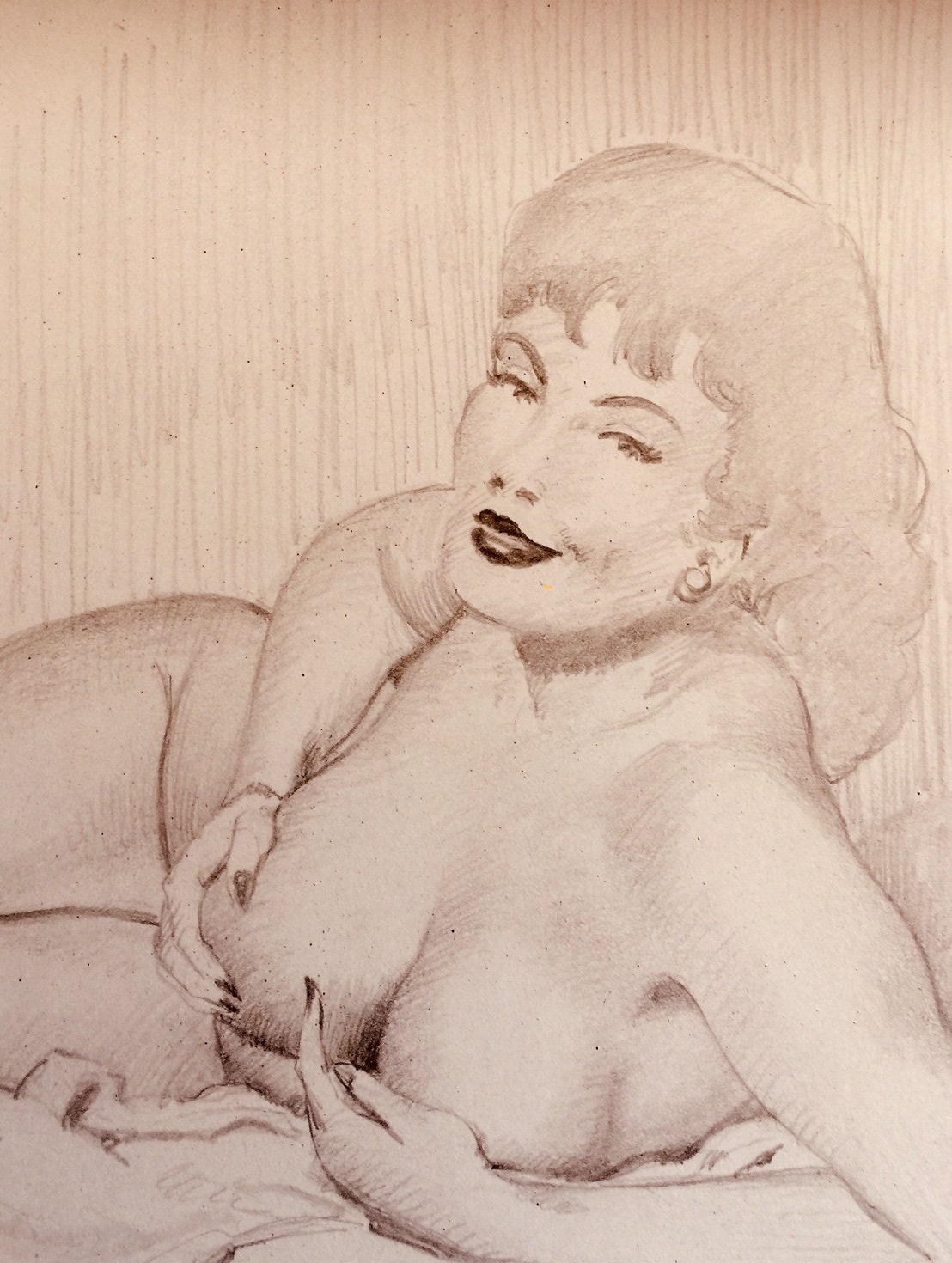 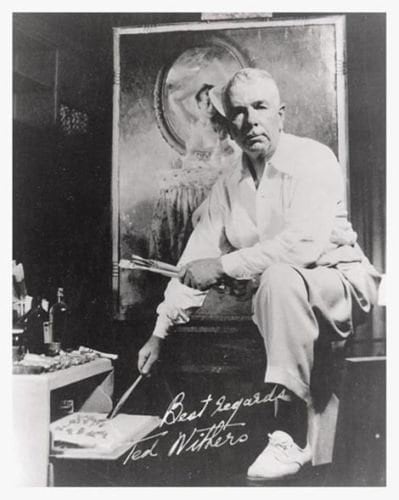 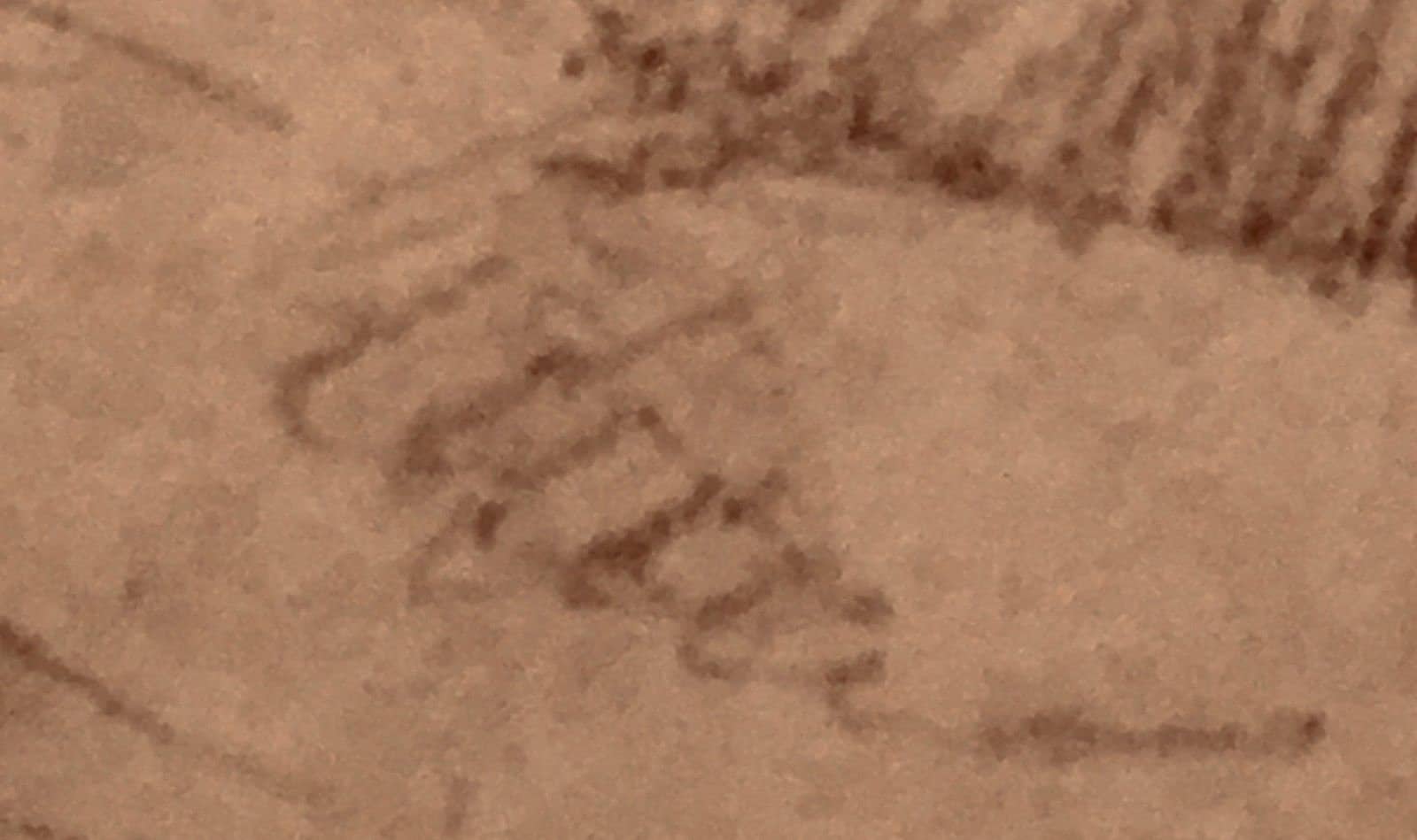 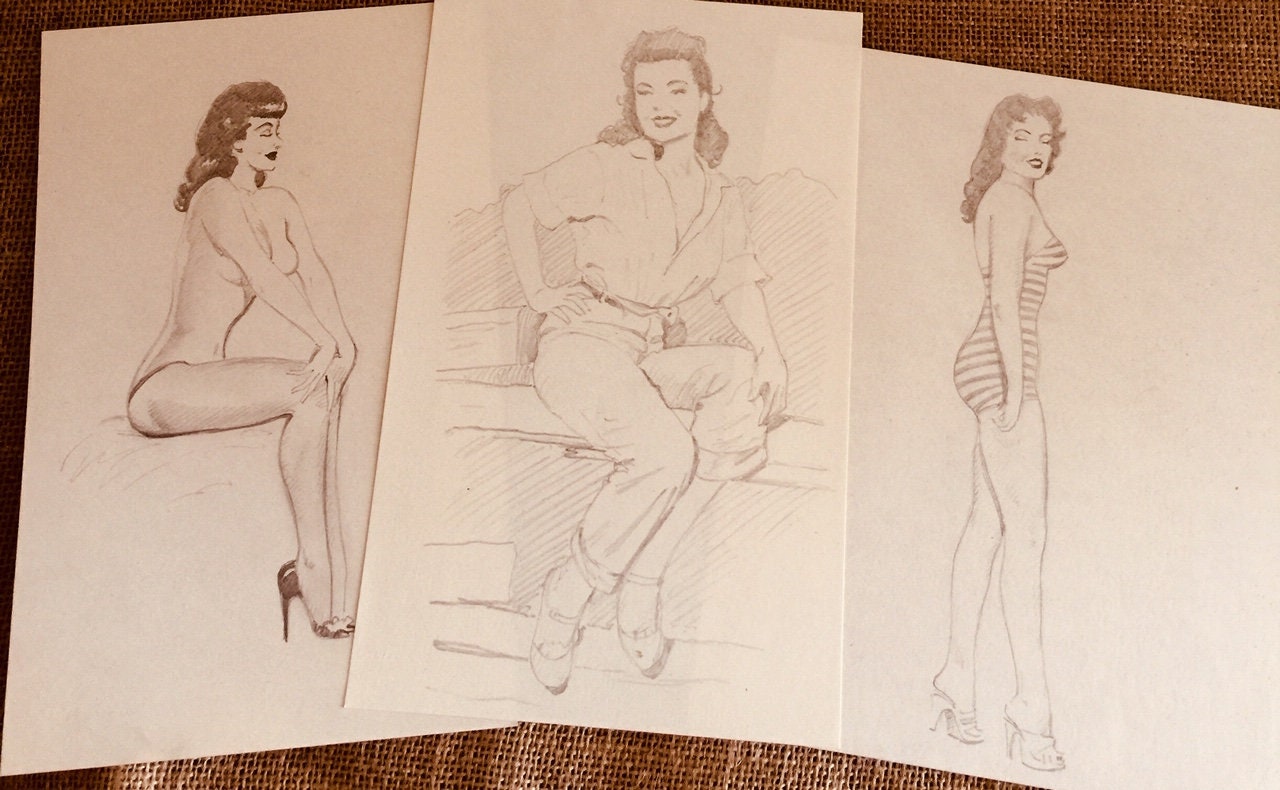 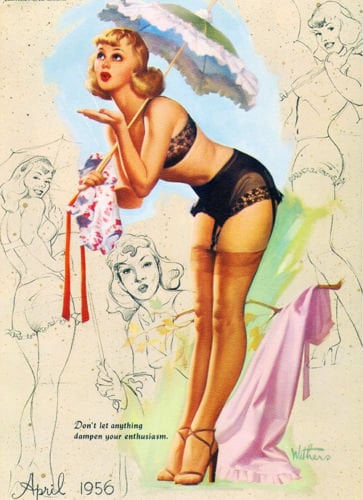 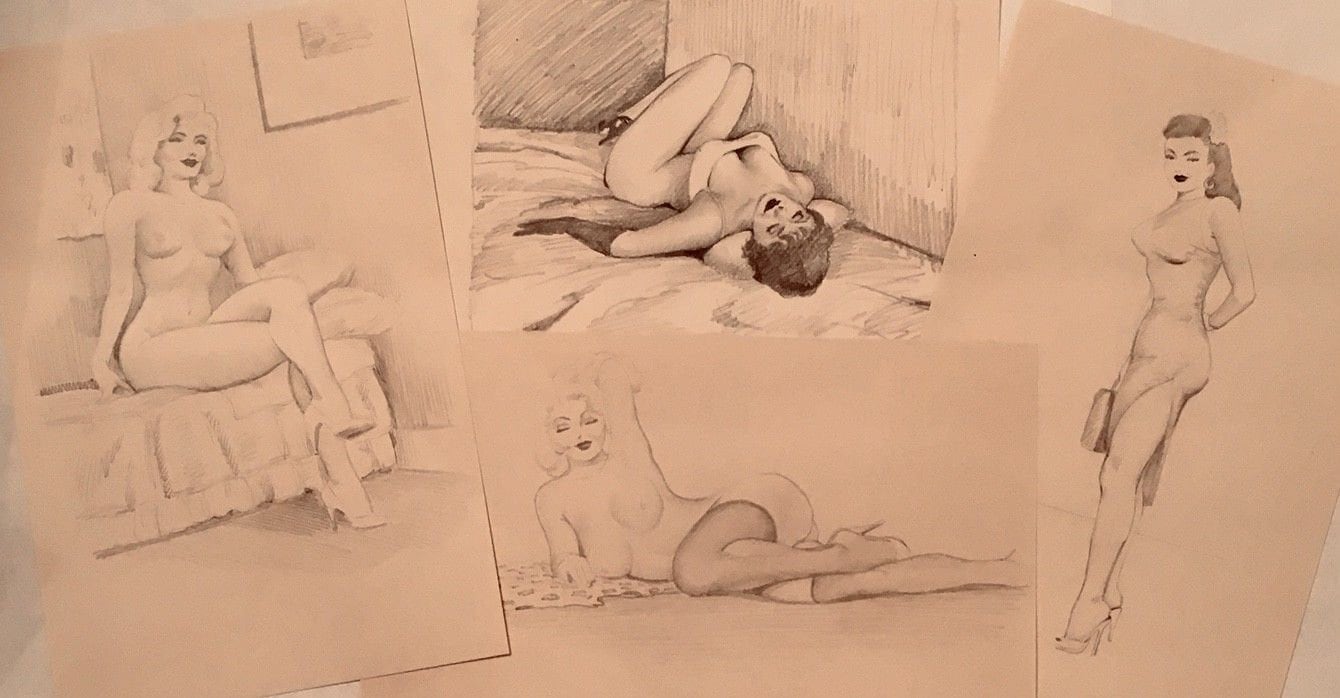 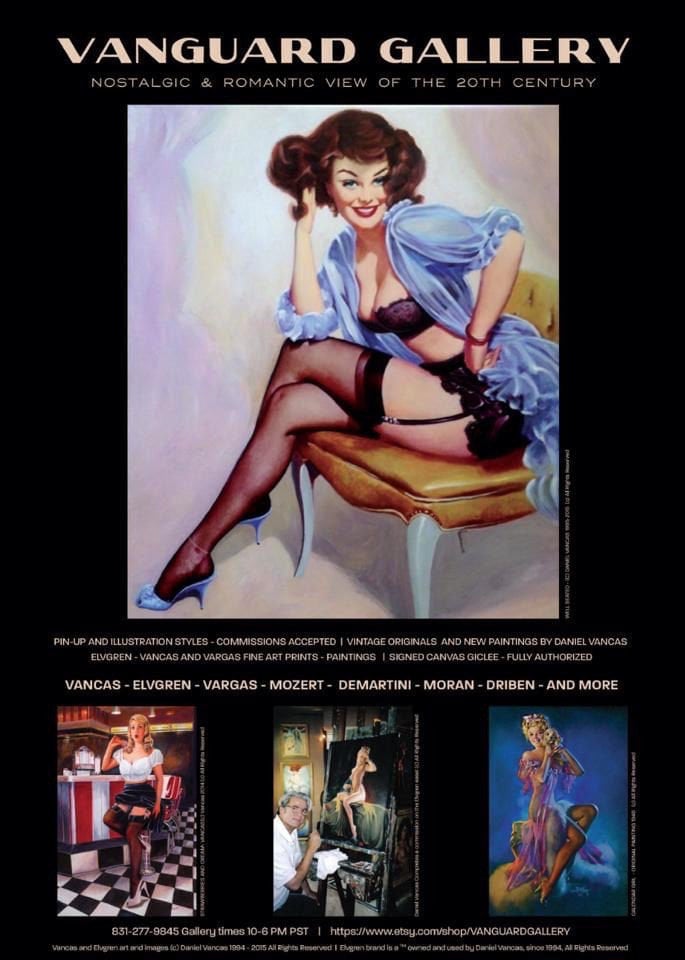 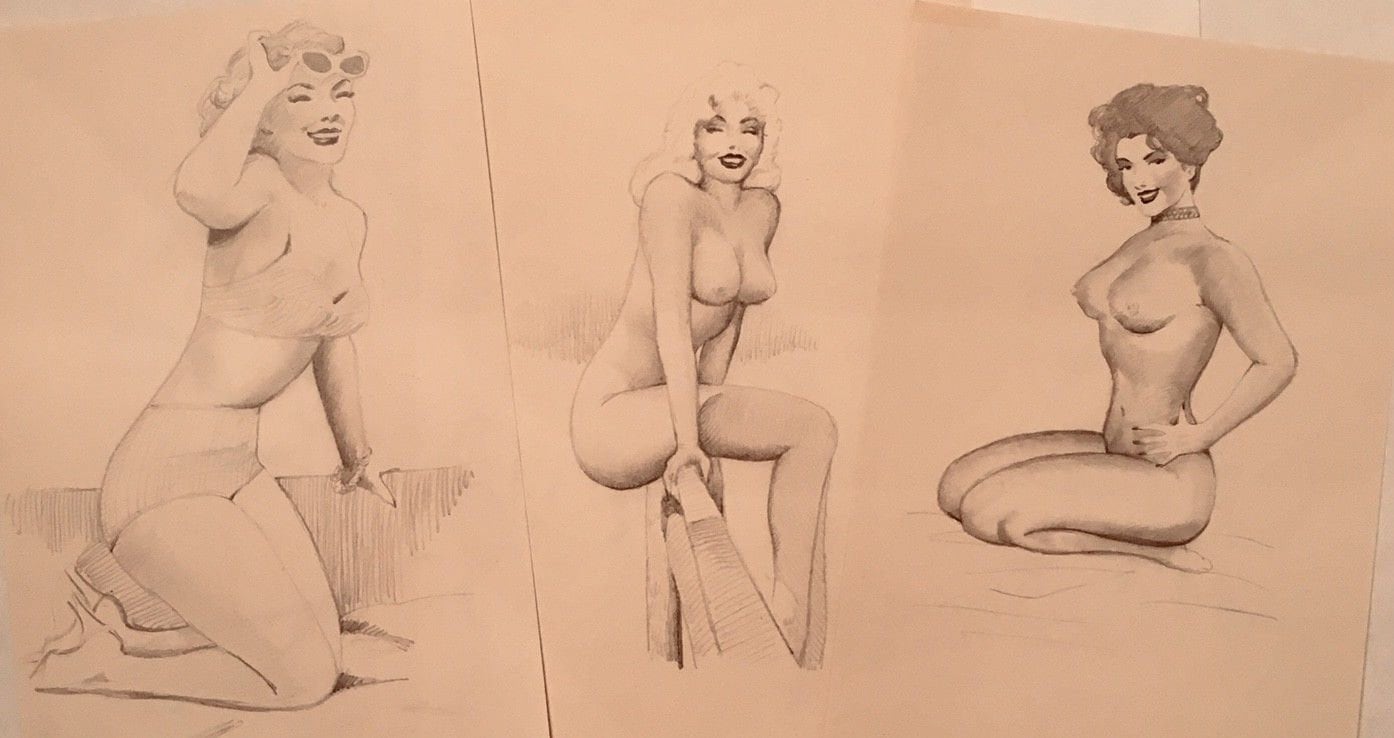 SALE! TED WITHERS of HOLLYWOOD associate of other pin-up calendar artists Gil Elvgren, Earl Moran, Vargas and others of the time.

60 to 70 YEAR OLD ORIGINAL ONE OF A KIND PINUP ART DRAWINGS!

ORIGINAL AND STORED SINCE NEW - VINTAGE Drawings from the 1940s, 50s and early 60s

Unsigned Attributed to Withers with one signed drawing found in the same collection. Expert opinion by Daniel Vancas, below.

These drawings were recovered unused and stored since new and carefully packaged, and bought from an estate sale dealer in Los Angeles several years ago. This was a large collection of smaller carefully crafted commercial grade pinup drawings, mostly nudes. I bought them all. I decide to sell a few of these fantastic drawings. And present them to you for the first time. Some have a 2nd drawing on the reverse. I will note it in the listing when they do.

Over the years, I have owned and sold several of these Ted Withers Original pinup Paintings. I have also owned Fritz Willis and Mac Pherson paintings, also with background sketches in the paintings. All were used for the creation of the popular "Artist Sketch Pad" calendars of the late 1940s and 50s. I have studied the drawings on the backgrounds of the oil on board paintings by Ted Withers carefully, as well as the other two artists. All three were living in Southern California then. I have cleaned and partially restored them. This precise skill, craftsmanship and of his line work was amazing and better than most. I have also have collected many of the vintage 1950's Wither's Sketchbook calendars as well. Knowing he was an artist working in and around Los Angeles and Hollywood, including MGM that was in Culver City, it was no surprise to me when I found this collection of highly skilled precise pinup art drawings of models and some Hollywood stars of the late 1940s and 1950s. All of the drawings came out of one package in an estate sale. There was no provenance or description other than it was from a local pinup artist to the now deceased. Since I knew that there was three in the Southern California area that did "Artist Sketch Books" in the 1950s, for the same calendar company, I had it narrowed down. But it was the skill and precision drawing method of a highly trained artist that clearly set him apart from the other two highly talented artists. And yes I also owned Fritz Willis and a Mac Pherson with sketches in the paintings, but these clear and uncompromising lines in the drawings ruled them out. Yes, my 25 years as a pinup artist, an Elvgren replica artist, and expert helped me to determine who did these unsigned drawings. My best opinion is that it's attributed to Ted Withers. Which by the way was his and several others pinup and illustrators custom not to sign art. More so if they were considered mock-up drawings. Often even on the paintings shipped to the calendar Company, they were left unsigned. This was so the calendar art department could put a past up of his signature in the final best layout they saw fit. Recently while reviewing the drawings I found a very small signature of the artist barely discernible and hidden but there. At last, I can say my opinion is confirmed. This art in my expert opinion is the unsigned development studies and drawings of Ted Withers and based on the models used from the 1940s through 1950. On showing several of these to my acquaintance, popular movie Star and pinup glamour girl of the era, Mamie Van Doran, she also told me the art was the late 40s and early 50s. She had posed for Vargas, but could not confirm the names of other artists. Mamie and Marilyn's photos were distributed throughout Hollywood and the studios, so the artist who also worked there has access to many photos to merge with Wither's own studio models. This too was a common practice with all the pinup artists.

Unframed, Pencil on paper, artist draft. Condition as seen in photos. Some of these have storage edge wear, use handling etc.
All drawings Sold as is, unsigned. Good condition for age, stored since new.

These drawings offered in this Vanguard Collection are estimated to be from the 1940s and 50s. All are good to great condition, some near mint, some minor storage edge wear. Buyers to Review the photos for condition approval before purchase. All can be professional framed and displayed with great results. All stored since new by the artist sold to Vanguard Gallery in 2001 and many in private art archives since. As the art is on a tan slightly yellowed paper, some slight variation in photos to art.