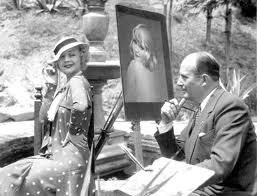 A rare limited 12X18 Print - I know you will LOVE LOVE this print!
See the First image shown only. Artist Biography is seen below.


* ARTIST BIOGRAPHY :
Henry Clive (1882-1960), born in Australia was a magician, painter, and magazine illustrator.
Born Henry Clive O'Hara circa 1882 Australia
DieD December 12, 1960 (age 77) Hollywood, California
Clive traveled the world as a magician, billed as "Clive the Illusionist", "The Great Clive" and "Debonair Magician." He was assisted by for a time by May Sturgess noted to be the most beautiful girl in vaudeville.
He played the best theaters in the country and featured the Die Box and Spirit Paintings (possibly the first to do so in the United States, which he move to in 1903). His act was listed in Holden's Programs of Famous Magicians. Was art director for Charlie Chaplin productions and played a villain in City Lights.

He left the stage sometime around 1911 for a successful career as an illustrator. The early 1920s, began painting Ziegfeld Girls, then big stars (Gloria Swanson, Polga Negri) for promo campaigns He moved to Hollywood in 1929 and became famous as a designer of film posters.[2] He was also prominent as a painter of magazine covers for Randolf Hearst magazines. Also illustrations for the slicks True Confessions, Screen Play,


Art can be inspected on request at Vanguard Gallery. 831-620-0400, Where we have Elvgren, Vargas, Petty, Moran, Armstrong, Zoe Mozert, Willis, Munson, Vancas, DeMartini, and many others.