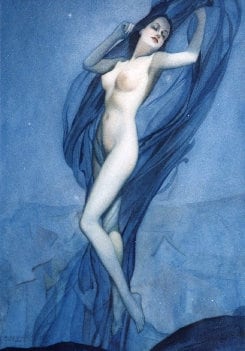 SUPER SALE - HURRY FOR A LIMITED TIME ! ONE ONLY!

SMALLEST RELEASE - ONLY 125 PIECES and APs.

LISTED as SOLD OUT by EXCLUSIVE LICENSED PUBLISHER VANGUARD GALLERY in 2005!


An Art Deco romantic love story in a painting by Vargas!

Alberto Vargas' name and art has becom without question one of the most recognized 20th Century American artists today. As in the case of fellow contemporary pinup artist Gil Elvgren, Vargas, the artist, has has had his artwork reproduced more than than an other popular artists. Indeed, his images and style have become infused with our popular Midcentury culture as a art icon of the 20th century. When one mentions the name Vargas, many think of the Esquire magazine's "Varga Girls" of World War II that sold war bonds and magazines! These pinups were the stuff of young fighting men's lonesome dreams. And we're often the first choice for coping into Nose Aart designs on Bombers. Some of us think of his Playboy career from late 1950s to 1975, a generation later. However, before there was Playboy, True Magazine, Esquire and WWII, this accomplished artist successfully labored for 24 very important years.

Within two years of his arriving to New York City in 1916, two wonderful events that shaped the life of this young aspiring artist from Puru, who had studied his craft in Paris and London. Firstly, the was Florence Ziegfeld, creator of the famous Ziegfeld Follies! This is where the artist for 13 years, was one of the set and fashion designers. Then he was the exclusive portrait artists of the many "It" or "Ziegfeld Girls". Later, many of these same women, who modeled for the your artist, would become prominent actresses on both stage and screen. Then the 1930's ushered in the Golden Age of Hollywood films, and as fate would have it, he would be reacquainted with many of his now famous former models and Ziegfeld performers, working for Fox and Warner Borthers in Hollywod. Finally and more importantly, he met a young woman about 1918, Anna Mae, who was first his model, and after a decade of waiting, his wife. She would become is greatest support and influence throughout his long life.

This fine art painting, is a transparent self expression of the life and soul of the artist at this time. It is both triumphant and bittersweet with a lonely overton, and subtle reference to his old homeland of Puru. It's beautiful feminine form is raising gently in the starry nighttime sky. it's a dream like heavenly vision, all set in the gentle background scene. Looking deeper, one begins to see a shadow of a small hillside community of adobe homes in a cliff side town. This clearly is a reference to the memory of the artist's homeland and family that he left behind many years ago.

The Blue Nude, circa 1928-29' was painted in New York City. It was a most joyful time in the artist's life. Now accomplished in his craft, Alberto had finally wed his beloved Anna Mae. Then after sending his entire adult life living aboard, he returns to Puru, to visit his family with his new wife and this important painting. It was left there and long forgotten, until found by his Niece in the early 1990s and brought back to America. Daniel Vancas found it ignored in a basement collection of more famous pinup pieces and recognized at once the significant milestone that this painting represented to the artist, and brought it to his Vanguard Gallery in Carmel in 1994 and in 1995 Daniel Vancas was selected as the world exclusive publisher of The Blue Nude by the Vargas Estate.

Daniel Vancas and Vanguard Gallery of Carmel, is proud to have be selected. And the licensed publisher of this important painting. Our choice to make this collector's edition in smallest release number, is our desire and commitment to satisfy The Vargas collector who seeks and ad both beauty and value to his collection.

Art can be inspected on request, Where we have Elvgre, Vargas, Petty, Moran, Armstrong, Zoe Mozert, Willis, Munson, Vancas, DeMartini, Bradshaw Crandell and many others.