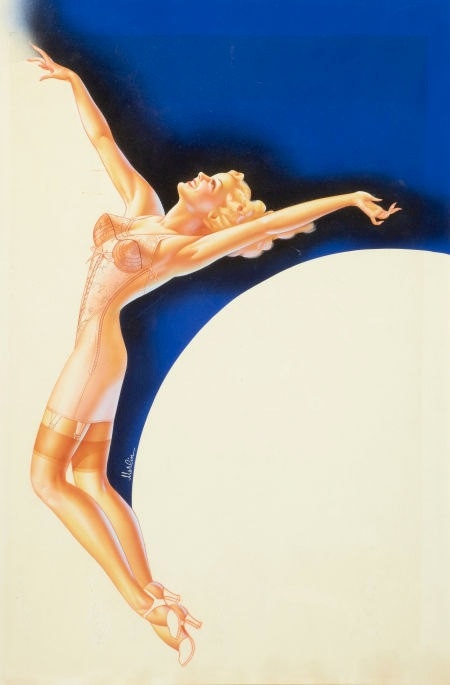 YOU PICK YOUR SIZE!

One of the most stunning of all advertising works, by this noted artist Who also painted 40's and 50s pinups for Magazine covers of Wink, Titter, Whisper, Eyefull and the like.

I know you will LOVE LOVE this print!
See the First image shown only. Artist Biography is seen below.

YOU MAY LIKE OR OTHER ART AND NUDES OFFERED. (also shown here as a suggestion)


ARTIST BIOGRAPHY: From Pedia
MerlinEnabnit (1903-1979) was a painter, teacher, author, lecturer. His painting subjects included portraits, landscapes, pin-ups, and the Southwest. Born near Des Moines, Iowa he developed an interest in art at an early age and began sketching on wrapping paper in his father's grocery store. At the age of 15 he graduated from high school and entered Des Moines University. His father was against his son pursuing art as a career, so Merlin entered college as liberal art major but switched to fine arts. He also studied at Cummings School of Art in Des Moines. Just out of college, he received requests to do portrait paintings, which he continued to produce throughout his career.

In 1929, he resided in Seattle, Washington, and as a young man he met and was
inspired by both Sydney Laurence and Eustace Ziegler. He also socialized with numerous other artists including Nicolai Fechin, Grant Wood, Will Foster, Andrew Loomis, Dale Nichols, and Ben Stahl.

During the WWII years, Enabnit produced Calendar Pin-up girls that were favorites of British soldiers. The Pin-ups are known as "Merlin Girls" appeared in publications including "Sketch" magazine, and on calendars, playing cards, and postcards. Many of these paintings were produced using an airbrush technique and many are signed simply "Merlin".

The artist also lived in Los Angeles for a time where he painted many portraits of Hollywood stars before returning to Seattle. He retired to Arizona where he lived until his death in 1979 at the age of 76. His professional career had taken him to various locations throughout the US including Seattle, Chicago, New York, and Hollywood.

He was a member of the Iowa Artists Club, Royal Art Society in London and the Puget Sound Art Group as well as some fifty-art societies throughout the US.


Art can be inspected on request at Vanguard Gallery. Where we have Elvgren, Vargas, Petty, Moran, Armstrong, Zoe Mozert, Willis, Munson, Vancas, DeMartini and many others.